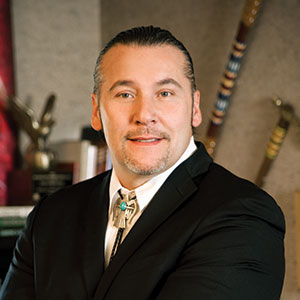 From the time of RedStone’s inception in 2008, President Chris Samples has worked diligently to secure projects for the company and establish relationships with potential partners.

Upon graduating from Northeastern State University in 2000, he worked for the Cherokee Nation for 6 years. During that time, he used his understanding of adolescents in crisis and the effects of substance abuse to provide mental health services and educational programs to youths. In 2005, Chris returned to Northeast Oklahoma to help establish economic security for his own tribe, the Eastern Shawnee Tribe of Oklahoma, where he served on the economic development team for six years. In 2008, Chris was elected Treasurer of the Business Committee.

In October 2010, Chris received the National Center for American Indian Development’s “40 Under 40” award.  This prestigious award highlights American Indian leaders under 40 years of age who have demonstrated exceptional achievements in their business, community, native culture and personal areas of their life.

Chris’ knowledge of tribal government and culture along with his business experience ensure RedStone succeeds in its goal to provide a qualitative, hands-on approach to General Contracting and Construction Management.